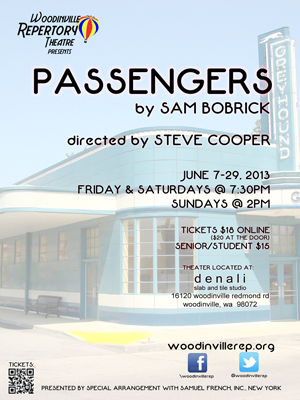 Woodinville Repertory Theatre is proud to present Passengers by Sam Bobrick.  It is directed by Steve Cooper.
Four actors, a man and woman in their mid to late twenties and a man and woman in their mid to late forties, play seventeen characters in eight short scenes that take place in a small mid-western bus station. The scenes, which segue fluidly from one to another without stopping, vary from comedic to poignant and are tied together in the last scene.
“For a real adventure in theatre, hop on board Passengers…[It] is a fresh, idiosyncratic, irreverent comedy set in, of all places, a bus station. In eight sketches, a series of characters meet in the bus station. The encounters weave together a subtle but profound theme…Passengers is a great script. The characters are good and the dialog witty and sharp…Everything about this show is unexpected and unconventional.” – Niles Daily Times
“Sam Bobrick, the talented playwright, once again shows his innate ability with this play’s sharp wit, dry humor and impeccable comedic timing.” Bonnie Priver – The Tolucan Times

Brynne is pleased to make her Woodinville Rep debut. She has performed in about 60 roles in the past two decades in various community and professional theatres from Edmonds to Olympia. Recent local favorites:  Myrtle in Stone Soup’s “Kingdom of Earth”, M’lynn in Attic’s “Steel Magnolias”, Hermia in Burien Little Theatre’s  “Dead Man’s Cell Phone” , Jennie in Bellevue Civic’s “Chapter Two”, Sister Aloysius in Driftwood’s “Doubt”, and the title role in “Sylvia” with Valley Community Players. She is so honored to share a stage with her talented son Benjamin for the first time, and thanks Scott and Kendra for their awesome comedic gifts – it’s been great fun “riding the bus” with all three of you.  Also,  much gratitude to my amazing and loyal friends and family who travel far and wide to come and clap for me…you are the laughter and the hand to hold that our playwright speaks of – thank you, thank you very much!

Scott trained for two years at The Guildhall School of Music and Drama in London, England in the Professional Acting Program, emphasizing Classical, Modern and Theatre of the Absurd as well as training in Armed and Unarmed Combat/Stage Fighting. He was cast two years in a row for Robert Redford’s Sundance Playwrights Festival working with new playwrights on original scripts. He also worked developing new scripts at First Stage in Los Angeles and Wordbridge in Florida. Scott has acted in London, New York, Salt Lake City, Los Angeles and Seattle. Favorite roles include Tessman in “Hedda Gabler”, Captain Shotover in “Heartbreak House” and Jacques in “As You Like It”. Scott is thrilled to be working with the lovely and multi-talented Brynne Garman again and happy to be working for the first time with the amazing and beautiful Kendra Pierce whose timing is exquisite and with the very talented Ben Garman who keeps me laughing.

This is Ben’s first show with WRT and first time on stage in nearly 10 years! Ben would like to give special thanks to the Kincades and Captains; Emily and Dylan for all their help in the last few months. He also wants to thank all the other actors and the crew for making the one of the best shows he’s ever done!

This is Kendra’s debut at WRT, and she is so happy to be working with Steve once again. She has worked with him on The Who’s “Tommy” and an original adaptation of “Frankenstein”. Look for her next in quiet’s production of Merchant of Venice and will be choreographing their fall musical “Reefer Madness” She would like to thank her Roomies and her “J’s”: Dad, Jerry, Janelle, and Jesse, for always being there. And a BIG thank you for her cast for making her laugh her face off every rehearsal J!

Steve is a local freelance director and designer working for several of the region’s theater companies. Recent directing credits include “Jesus Christ Superstar” at Burien Little Theater, and “Last of the Boys” at Pierce College. Steve also directed WRT’s season opener “Bold Grace”, a one woman show about a 16th century female Irish pirate. His next directing project is “Game Show” at Theater Schmeater, and still later this year will be directing “Young Frankenstein” back down in Burien. Also a lighting designer, Steve is resident designer at Theater Schmeater and Northshore Performing Arts Center.