by Tim Clue and Spike Manton
directed by Marsha Stueckle 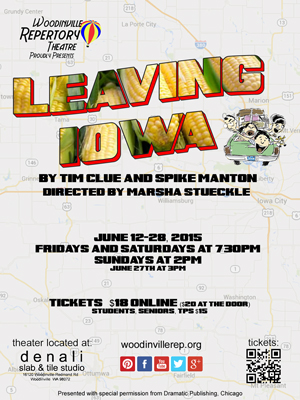 The critically-acclaimed play, “Leaving Iowa,” by Tim Clue and Spike Manton is a hilarious, family-friendly comedy that is a toast to the idealism and character of parents from the “greatest generation,” and a little roast of their dedication to the family road trip. This comedy about family and family vacations is a show suitable for ages 10 to 110 and was nominated Best New Play in the Country by the Detroit Free Press and one of SoCal Theater’s 10 Most Memorable Moments of the year after its run at the Laguna Playhouse, stating the play included “the most frighteningly realistic depiction of a family summer road trip” the reviewer had ever seen. We take that as a compliment.

“Leaving Iowa” is a postcard to anyone who has ever found themselves driving alone on a road, revisiting fond memories of their youth. Economically-staged for anywhere from 6-24 actors, the story centers on Don Browning, a middle-aged writer who returns home and decides to finally take his father’s ashes to his childhood home, as requested. But when Don discovers Grandma’s house is now a grocery store, he begins traveling across Iowa in search of a proper resting place. As he drives those familiar roads, the story shifts back and forth from the present to memories of the annual, torturous vacations of Don’s youth. Ultimately, Don’s existential journey leads him to reconcile his past and present at an unpredictable and perfect final destination.

The Woodinville Repertory Theatre’s home is at the  Denali Slab & Tile Studio in Woodinville.  Denali is located in the Sammamish Valley, near many of our  excellent local wineries! Our home is made possible by the generous invitation of Prem and Lily Gnanarajah the owners of Denali Slab & Tile.

Please stop by and thank them for supporting live theater in Woodinville!